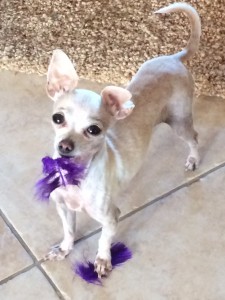 I’ve had Toni, my last, and for now, final rescue, for 9 months now and I often think back on the long journey I went on to find her so I thought it might be helpful to share with you that journey and what I learned along the way.

I had always wanted a tiny dog. When customers came into my shop and said they had a 2 lb., or 3 lb dog my heart would melt and I could hear my inner voice say ” oooooh, I want one like that “. The dogs that have come into my life to this point all were a little bigger and if I was going to save one more life, I made the decision to go after what I had always wanted. A tiny one.  But,  its not easy to find one that small. They are few and far between and they are snatched up quickly in the Shelters.  It would have been easier to buy one but given my politics, not the moral thing to do. Not when so many Chihuahuas are put down for lack of a home in Southern California each month. There was no choice for me but to rescue and save a life. So, I started to put the word out in the community that I was looking for a tiny Chi to give a home. Girl or boy, young or old, but it had to be under 3 pounds. Although I had been around a lot of the Rescue folks with the work I do at Spoiled Dog Designs,  my search for Toni drove home to me the difference between the Rescues and the Shelters in a way I had not fully grasped before.

Through the process, I got to know a lot of wonderful people who work tirelessly saving dogs’ lives and finding dogs and cats homes. The local folks at the Pet Rescue Center,  Animal Samaritans, Tiny Dog Rescue, Blind Dog Rescue,  Loving All Animals and many others pull dogs from kill shelters and save their lives. Once a dog is in their hands, they are safe until they get adopted. They attend to their medical needs, spay/ neuter them, and depending on their facilities, some put them with foster parents who give them love and socialization.  There  are Shelters like the Palm Springs Animal Shelter that are no-kill shelters that keep the dogs and cats until they get adopted or are taken by a rescue. They are safe there.  Then there are kill shelters where, try as they do to keep as many as they can,  some can’t be kept for a variety of reasons. Health, behavior, space, age, time there. The statistics in Southern California are not pretty. Especially for PitBulls and Chihuahuas.
At that point I started to understand Rescue Math: That adopting a dog saved two lives. The one you adopted and the one that took its space in the shelter. I had heard the phrase before but not fully grasped the significance of it until I fully understood the differences in the kinds of facilities we had in our community.
So  my first learnings were:
1. The three levels of facilities: Rescues, No-Kill Shelters and the other kind of Shelters.
2. Rescue Math: Adopting one dog saves two.

Choosing the Right Winter Clothes for your Dog

Despite the fact that most dogs are covered head to tail in fur, just like us they too need a little protection from ...
Read More

Why does my dog need a harness? Can I walk my cat? How do I know what size harness my pet needs? These are just a few...
Read More

With the holidays fast approaching, here’s 10 Holiday Pet Safety Tips to keep our pets safe and happy during this fas...
Read More