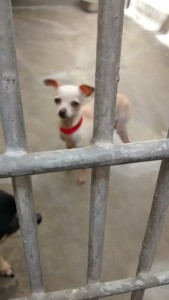 In May 2015, an email arrived from Alicia Tully of the Tiny Dog Rescue. It contained the photo of this tiny dog behind big bars in the North Central LA Shelter. One of the “Other Kind” of shelters. She was identified by #A1481342, 2lb. 8oz.  (The number was bigger than she was). She was described as 2 yrs old – but that’s what they always say.  Her story was that she was a stray living behind a trash can in a loud alley in LA. Dirty, Cold, Hungry. Thankfully she got picked up and brought to the shelter before she starved to death.

I called the shelter and learned that she was available June 4th and that the shelter has a First Come First Adopts policy and a Blind Auction if more than one adopter shows up at the same time. That means potential adopters put a bid in an envelope and the highest bid wins no matter how good or bad the adopter is. “Does that mean you give it to the highest bidder even if that person is going to use this tiny dog as bait to train fighting dogs?” I asked. I was told the dog goes to the highest bidder, they don’t check who that person is. Well, besides being appalled, I was not getting into any auction. Sooooo I was on the road from Palm Springs at 5AM and because of morning traffic, got there at 8:15AM shortly after they opened. No one had gotten there before me to get her. I scooped her up in my arms and noticed that she had Angelo’s eyes (my oldest Chi) but she would squint a little and look at my sideways the way my Mother used to do. She was so scared she was shaking so hard she had me jumping around with her. After about 15 minutes, she calmed down and I noticed how curious she was. She was craning her neck to see out the window so I stood up at the window with her while she looked very seriously all around the yard of the shelter. I liked how intelligent she seemed. She was calm and smart AND had Angelo’s eyes but gave me the look my Mother used to give me……she was my dog! 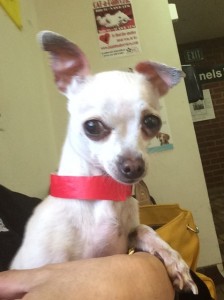 Here she is while I’m holding her in the shelter. See the dark area at the top of her ears. Its grunge and its all over the back of her ears too. I had to use a lotion make-up remover to get it off and the hair came off with it (its since grown back). And check out those nails!

I tried to get them to let me bring her home and have her spayed locally by someone I trusted and so I would not have to make another round trip to get her but “no go”. So the next day she went off to a nearby clinic and I drove back to pick her up. (horrible place, must be what a back alley abortion clinic looked like in the 50’s) I asked them to bathe her, clean her teeth and trim her nails. They did all that but in such a way that she was sore. Poor thing, all that in addition to her hysterectomy. Besides that, they gave her too much anesthesia for her 2 1/2 lb size so she was over drugged.

It took a couple of days for the anesthesia to clear, and a few more day of eating lots of soft warm small meals for her sore mouth and little tummy for her to act like she felt better.  She was shivering a lot so I put sweaters and t-shirts on her and she clearly liked it.  I think it made her feel secure. 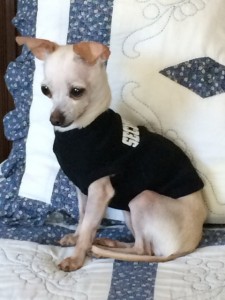 Here she is sitting on my Mother’s bed wearing a Security T-Shirt. It didn’t take long to find out that t-shirt fit her personality to a “T”. She was small and feisty. So much so that Bruno and Bella were afraid of her at first. She was used to surviving in an alley. To her other dogs were competition for what little food she could find. She had to learn that there was enough food for all of them, they were all treated equally, and that she did not have to be in competition with her sisters and brothers for food, attention or love. With regular meals and a full tummy every day she learned about the food but still has trouble waiting her turn for treats sometimes. It took longer for her to realize there was enough love and attention to go around.

For a while I took her everywhere with me so we could bond and so that I didn’t have to worry about leaving her with the other dogs. She did great riding in the carseat, in a carrier, in the basket of a shopping cart in stores and in a stroller when I was working. 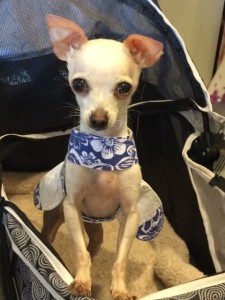 After about a week she ran outside with the pack one morning and started sniffing the other dogs. A couple of weeks later she started playing with the others. She was bonding with her pack. And she had surely bonded to me….and me to her. I had found my Tiny Teacup Chi and I was in love with her.

For those of you reading this who think “5 dogs, is she crazy?” It may help you understand to learn that in California we kill thousands of dog each month and even more cats because they don’t/can’t get adopted. Of the dogs, PitBulls are #1 and Chihuahuas are #2. As you have read, I always wanted a tiny teacup and had enough room in my home and heart for one more itty bitty one. So now I have one and I’ve saved two souls. Toni  and the dog that took her place in that “Other Kind” of shelter.

For those who still wonder why I kept looking and looking and saying “No” to the others who needed a home, I can tell you that she is the soul I’m suppose to take care of. I knew that when I picked her up and held her all dirty and grungy in the shelter. She is the dog I was looking for. I can also tell you that it was my learning experience to go after what I wanted and not give in because “what difference does a pound or two make?”.  This wasn’t the first time I had gone after a goal and reached it but it was the first time that saying “No” had possible severe consequences to other dogs that were in the back rooms of the “Other Kind” of Shelters.

Toni is now healthy, has beautiful blonde hair on her ears and has filled out to a whopping 3.5lbs. Yes, I wanted one under 3lbs but she is the dog I’m suppose to have so what difference does 1/2 a pound make.  : )

I want to thank again all the people who helped me find Toni. Especially Janet, Lynn and Lorie of Loving All Animals who called, emailed, and texted notices of dogs they had just learned about. They led me to Alicia Tully of the Tiny Dog Rescue who not only found Toni and sent me her picture but exchanged many late night texts and coached me on the North Central LA Shelter so I had the best chance of getting her. Thanks also to Jennifer Uberti of the Thousand Palms Shelter and Alicia Bailey, Board Member of the Palm Springs Animal Shelter who sent pictures of dogs as soon as they came in so I could come see them. You folks all do great work and were wonderful. My family thanks you all. 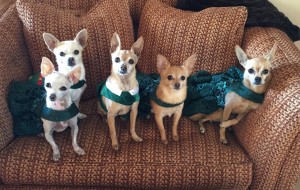 I hope that sharing this process has been enjoyable, informative and useful to my readers. Thank you for reading it.

Choosing the Right Winter Clothes for your Dog

Despite the fact that most dogs are covered head to tail in fur, just like us they too need a little protection from ...
Read More

Why does my dog need a harness? Can I walk my cat? How do I know what size harness my pet needs? These are just a few...
Read More

With the holidays fast approaching, here’s 10 Holiday Pet Safety Tips to keep our pets safe and happy during this fas...
Read More