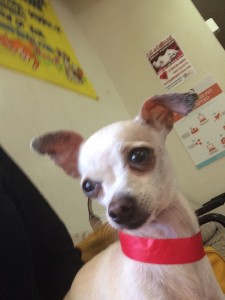 I have to start this post by confessing that when I got my first dog,  many years ago,  I wanted a beige Lhasa Apso. I called a breeder who had what she said was a beige puppy, went to see it, it was Grey. I don’t like the color grey. But I looked into those eyes and could not say “No”. I brought that dog home and loved it dearly but always knew that I had not been able to say “No” to those big puppy eyes.

So, years later,  I embark on the search for Toni, the tiny Chi. Can I now say “No” to the dogs that don’t fit what I want? After all what’s a pound here or there? Well, for me, it turned out to be an exercise in going after and getting what I had always wanted. In this case, it was a dog that was under 3lbs.

After telling everyone I knew in the Dog Community that I was looking for a tiny teacup Chi, under 3lbs, my next step was to go on a Loving All Animals Mobile Mutts Shelter Tour. If you are looking for a dog to adopt in the Coachella Valley, this is the way to do it. Loving All Animals has a stretch Limo, you get lunch, and they drive a small group  to a number of Rescues and Shelters to find your new fur-baby. Its a great way to get to more places than you would do on your own. That day,  none of us found our dog but Janet McAfee of Loving All Animals pulled a dog out of a Shelter and rescued it. That dog would be cleaned up, spay/neutered and taken care of until it was ready for adoption. What a lucky dog!

Next I started getting emails about local Chi’s that were either at Rescues or at a local Shelter. My network was working. Most were bigger than I wanted and I had to say “No”. That was easy to do when the dog was at a Rescue or No-Kill Shelter BUT when the dog was at the other kind of facility I knew that saying no put some of them at risk. That’s not just saying “No”, its a potential death sentence. But IF I was only going to adopt one more dog right now, AND IF I was really going to go after the tiny dog I had always wanted, THEN I had to say “No” to any dog that  did not match my criteria. Even if they had those big sad eyes that always grabbed my heart.

At this point the Universe really started to test my resolve. I got emails about dogs in Shelters that were supposedly 3lbs. I would drive to the Shelter, the dogs would be put in my arms and it was way bigger than 3lbs. This happened a few times at the same shelter and it became a joke about their scale not working right. A couple were from the “Back Room” where they kept dogs that were too scared, timid, or other issues that kept them from being put in the adoption area. Precious as they were, and knowing the possible result of my response, I was sticking to my goal and gently handed the dog back and said “No”.

Again I got asked by people what the big deal was in an extra pound or two. Why was that so important to me. Couldn’t I love a bigger dog? Of course I could, I had 4 at home that I loved dearly. But I could only handle one more and it was time to get the tiny dog I had always wanted.

Every few days I searched PetFinders.com for my tiny Chi. When I did find a tiny one, I would call only to find that the dog had already been adopted. The tiny ones go quickly.

Then the folks at Loving All Animals introduced me to Alicia Tully at the Tiny Dog Rescue in Southern California. They rescue dogs under 4lbs and blind dogs. They do wonderful work. Alicia promised to let me know if and when she came across a tiny Chi that was available for adoption. Woohooo there was hope!

Being clear what I wanted, putting it out there, believing that it was going to happen, and learning to say  “No” when it wasn’t right was going to get me what I want! This was turning into a great learning exercise.

Tune in to Finding Toni: Part 3 – She’s The One! Where I’ll talk about actually finding her.

Bruno’s Close Encounter – How His Harness Saved Him

Last Sunday, Bruno had a close encounter with a large dog and his harness saved him from harm.  It was Sunday morning...
Read More

Building The New Website. This is the third and last part of our series about our New Website Journey. If you...
Read More

New Website Launch Announcement by Spoiled Dog Designs For those of us who are not trained in the details of build...
Read More